I used to be an avid fan of the cultural behemoth, The Walking Dead. Imagine my delight and surprise when type 1 diabetes actually made a cameo in one of the episodes! T1D, in the zombie apocalypse! What could go wrong?

Turns out, a lot. A minor character in the show’s sixth season passes out, only for a main character to flock to her side just in time to give her a shot of insulin. Within moments, she’s totally fine, though – spoiler alert – she gets attacked by zombies and doesn’t survive at the end of the episode.

What’s wrong with this scenario is that if a person with diabetes passes out like that, it’s more than likely that their blood sugar is low, and the last thing that they need is more insulin. I can’t imagine her blood sugar being high seeing as it’s the ZOMBIE FREAKING APOCALYPSE and supplies are scarce. I doubt she’s eating, well, anything, let alone substantial meals. And how the heck does insulin stay fresh during the end of the world, anyways? I don’t necessarily expect a TV drama to explore that in a tight 60-minute time frame, but these are things to consider, as well as details that leave unusually informed viewers like me a little bemused and irritated. 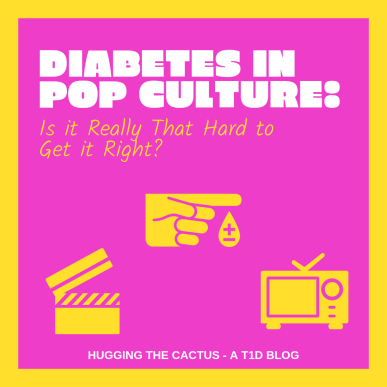 And it’s not just The Walking Dead – it’s a LOT of shows that make mistakes or omissions that can be eyebrow-raising. A few shows that come to mind include The Big Bang Theory, Hannah Montana, and even my beloved soap, General Hospital. The errors have been to varying degrees, but a common theme among countless television shows is perpetuating the stereotype that all types of diabetes are caused by a poor diet; specifically, consuming sweets. It’s always an extremely cheap joke, and one that’s gotten stale in its overuse.

Surprisingly, reality TV doesn’t help dispel any myths, which is a bit ironic. Recent episodes of Southern Charm and one of the Real Housewives franchises spread diabetes misinformation that was just ludicrous to me. In the former, a licensed anesthesiologist implied that his girlfriend shouldn’t eat a pastry because it’ll cause diabetes (insert eye roll here) – last time I checked, an anesthesiologist does not know the intricacies of the endocrine system, so who is he, as a medical professional who ought to know better, to say something like that? And in the latter, one woman was scolding her T2D husband over not taking care of himself. She explained his condition in a confessional…but did a really rotten job of it. If I didn’t know anything about type 2 diabetes, and I “learned” about it from this source, then I would be seriously misled.

I’m not trying to be oversensitive here, but it is hard for me to understand why pop culture struggles to get certain aspects of diabetes right when it appears in various story lines. There’s a wealth of correct information out there that writers could rely on. It’s a shame that they don’t, because whether they mean to or not, all it does is add to the confusion and general misunderstanding of all types of diabetes.

Needless to say, pop culture in this day and age has a long way to go when it comes to the portrayal of diabetes.

3 thoughts on “Diabetes in Pop Culture: Is it Really That Hard to Get it Right?”