My short answer to that question is YES. Yes, it’s absolutely possible to eat pizza – and just about any food, in my opinion – without experiencing turbulent blood sugars.

It all just comes down to serving size, timing, and method of insulin delivery. Piece of cake, right? (Or should I say, piece of pizza?) 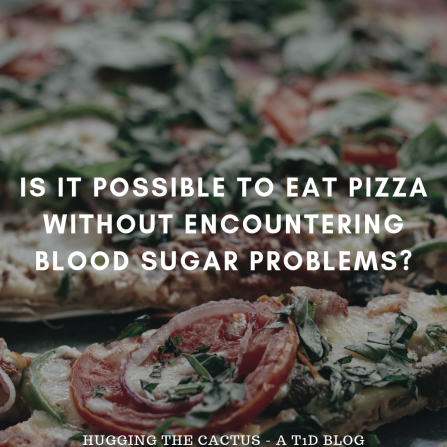 Well, it really isn’t THAT simple. Other factors include the exact type of pizza (Is it gluten-free? Are there toppings? Is the crust thick or thin?), whether or not other food/drink is being consumed with it, whether exercise or inaction will follow in the hours after eating it…truly, there’s all that (and more) that people with diabetes need to think about when eating any type of food.

But what’s different about pizza is that it has a particular combination of fat and carbohydrates that can make it a tricky food for people with diabetes to figure out how much insulin to take and when to take it. It’s a little easier for those of us who have insulin pumps, because we can utilize the extended bolus (or square wave) feature that allows us to give a certain percentage of a mealtime bolus at once, and select a time later on to receive the rest of the bolus.

If that last sentence didn’t make any sense, here’s an example of what I mean:

It’s dinnertime – 5:30 P.M. I have two slices of pizza that I plan on eating. One’s plain, the other has BBQ chicken on it. I figure that there’s 50 grams total of carbohydrates in the two slices of pizza. My blood sugar before eating the pizza is 130 mg/dL. I put that number into my pump, and also input 50 grams of carbs. My pump wants me to take 8 units of insulin to cover the pizza. Instead of administering the full 8 units at once, I hit the “extend” option and opt to take 75% of the dose now, and the remaining 25% an hour and a half from now. So I get 6 units of insulin at 5:30, and 2 units at 7:00. This extended bolus typically has the power to prevent my blood sugar from crashing and spiking hours after eating said pizza, and in turns, saves me from dealing with a massive headache and questioning why I ever ate pizza in the first place.

Granted, an extended bolus isn’t the end-all, be-all. It relies heavily on me and my ability to count carbs correctly and time my boluses perfectly. But I have had fantastic success using it, particularly in a recent situation in which I ate two large slices of whole wheat pizza, a side salad, and a bit of pita bread without spiking beyond 160. I can’t say whether it was the whole wheat crust that helped me out (maybe it has a lower carb count compared to regular crust?), or if it was just supremely accurate calculations on my end, but it really doesn’t matter to me in the end…because I know that I can eat and enjoy pizza – and again, virtually any food – without my diabetes ruining it for me.