My first month on the Dexcom G6 went by so quickly. The G6 entered my life during a particular hectic period: between a trip to Vegas, my 25th birthday, family gatherings, and work obligations, May was marked by constant activities…which made me that much more grateful to have my G6.

Before I continue with this review, I’d like to note how I got priority access to the G6. Approximately one year ago, I applied on Dexcom’s website to be a “Dexcom Warrior”. Basically, this just means that I filled out a form with my information and some background on my diabetes story. I didn’t expect anything to come of this; if anything, maybe I’d be contacted for someone to write a bio piece about me.

Fast-forward to January 2018: I receive an email informing me that I’ve been selected to participate in a Dexcom marketing campaign. There weren’t too many details other than that a shoot was taking place over two days in Atlanta, Georgia in February and that Dexcom would pay for my flight and hotel if I gave them my time that weekend. I was thrilled to receive the offer and gladly accepted. And I’m grateful I got to have such a unique, fun experience.

I didn’t learn until several weeks later that my participation in the marketing campaign would allow me to receive early access to the G6. In other words, I was going to be one of the first in the world to try this technology. My head is still spinning from that fact, and it’s not something that I take lightly. I understand that I’m fortunate to have access to it, and in return for this special privilege, I am putting as much truth and transparency as possible into my reviews of it.

Onto my one-month evaluation…new observations include: 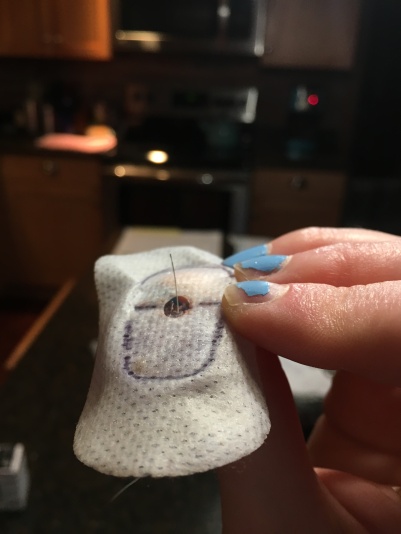 I’m pretty satisfied with my G6 experience so far. I’m hopeful for the future – perhaps it’ll be possible to extend a sensor’s lifespan or easily recycle the chunky plastic applicators.

But I’m interested in questions you might have – are you still wondering about something regarding the G6 that I haven’t addressed? Please let me know. I’d be happy to provide insight.

I have the extremely good fortune of being one of the first people in the world to receive the Dexcom G6, the latest in continuous glucose monitoring (CGM) technology. After spending almost two years eagerly anticipating its FDA approval, I could scarcely believe that I finally had it in my hands when it first arrived a few weeks ago.

I am partway through my second-ever G6 sensor, so I’ve had enough time to come up with some initial opinions on the system as a whole compared to the G5.

Let’s start with what I knew going into the first insertion of the G6. I knew that the transmitter would have a sleeker profile than the G5. I also was aware that the insertion process would be much more streamlined – all I would need to do is push a button and it would be on my body.  Plus, the G6 required 0 finger sticks or calibrations, could be worn for 10 consecutive days, and would no longer block acetaminophen (Tylenol) like its predecessors did. So far, me and the G6 were off to a solid start.

Then, it came time for me to actually put it on. Rather then end my current session with my G5, I decided to leave it on so I could see how accurate it was compared to the G6.

I was amazed by how easy it was to insert the G6. All I had to do was input a 4-digit code located on the sensor into my receiver. Once the code was accepted, I peeled the adhesive off the sensor, placed the system on my abdomen, folded the orange safety clip until it snapped off, and pushed the big orange button. I cringed when I did it for the first time; truthfully, I was prepared for it to hurt. It made a ka-shunk sound as the sensor inserted itself into my skin, and I…didn’t feel a thing. I marveled at how ridiculously comfortable it felt as I snapped the sleeker transmitter into place. I pressed one more button on my receiver to get the sensor warmed up, and that was it. Once two hours elapsed, my G6 system would be fully operational and could determine my blood sugar without requiring manual calibrations.

While it felt great to know that I didn’t need to worry about calibrating my new device, I was more interested in seeing how well it matched up with my G5.

And I was a little let down…at least, I was in the beginning.

Initially, I was not impressed at all by the G6’s reports. They matched pretty damn closely with my G5. I was beginning to wonder whether the technology really was that excellent, and then my G6 proved to me that it was, indeed, kind of a big deal. 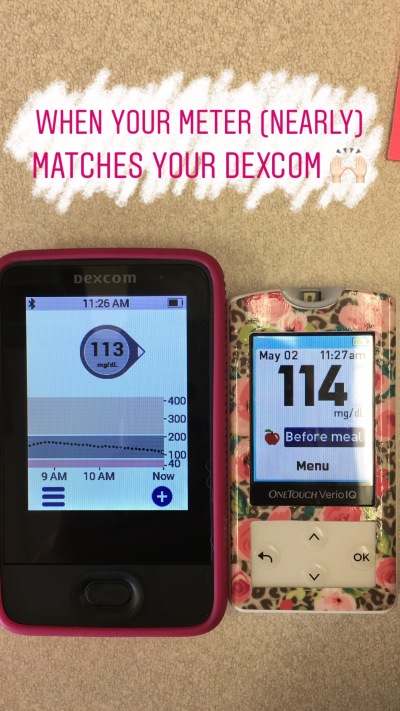 That moment came when it caught a low blood sugar sooner than my G5. I was feeling the early signs of a low, so it wasn’t much of a surprise when it alarmed. But what was particularly neat to me was that it was able to tell me that a serious low blood sugar (below 55 mg/dL) was oncoming in the next 20 minuets or less. In other words, it knew that I needed to treat my blood sugar right away to prevent a more urgent hypoglycemic event. That predictive feature was definitely a pleasant surprise.

As I wore my first G6 sensor for a few more days, it seemed to adjust better and better to my body. As evidenced in the above picture, it proved to be spot on when I compared it to the blood sugar readings I got from my meter. There’s absolutely still a bit of the classic CGM lag, as it takes about 15 minutes or so to catch up to what’s actually going on in the body, but that was to be expected.

I’m already on second sensor and I think it’s safe to say that I’m sold on the G6. But I don’t think that any product comparison/review is complete without a list of pros and cons, so here’s what I’ve come up with:

The bottom line is that the G6 is unquestionably an upgrade in diabetes technology. It requires fewer blood sugar checks and allows for greater discretion with its smaller size. The G6 is far from perfect, but it’s still a valued component of my diabetes toolkit. I’m excited to continue on this journey with it and discover just how much it helps me take the best possible care of myself.

I’ve blogged plenty of times about my “bad” diabetes days – you know, those posts that I talk about stubborn blood sugar that won’t come down/up, or how technology refuses to cooperate, or how I’m feeling intense diabetes burnout.

This made me wonder about the “good” days. Besides my blood sugars looking so perfect that I question whether my pancreas has magically started to produce insulin again, what sets those days apart from the “bad” (and plain, old, ordinary days)?

The answer likely varies among people with diabetes, but let me describe my version of a darn good diabetes day:

It’s days like that that make me feel validated – like all my hard work is worth it. It isn’t easy to manage diabetes every moment of every day, so when the diabetes stars align like this, it feels…wonderful.

The official announcement has appeared across all sorts of social media in the last 48 hours, but I thought I’d say something about it here, too…

The FDA approved the Dexcom G6, the new and improved version of their Continuous Glucose Monitor (CGM) system!

This is particularly exciting, because the G6 comes with many new and exciting features:

Visit the Dexcom website to read about all of the details. And as more information comes out about its availability, stay tuned…

…because you may recognize a familiar name and face along the way!