So basically everyone in my life right now is engaged, or on the fast-track to getting engaged.

And that’s awesome! No, seriously, it’s an exciting time for a lot of my family and friends. And I’m happy to be part of it all because I like going to weddings. Who doesn’t love to celebrate love?

Well, I can tell you what doesn’t love to celebrate love…MY DIABETES.

My diabetes hates weddings SO much that I’ve yet to go to one where it doesn’t act up in some way. 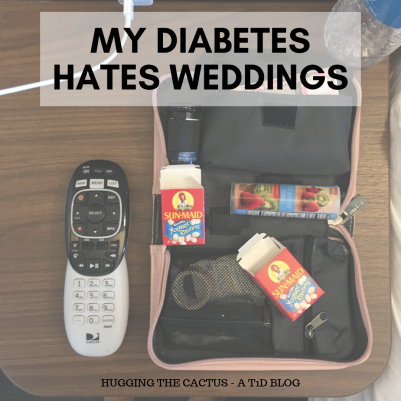 I was naive enough to think that it would actually be a good diabetes day during the last wedding I attended. And it was, for the most part: I woke up, had a Dunkin Donuts sandwich for breakfast, got dressed and made-up. I showed up for the ceremony with a slightly low blood sugar that was swiftly corrected with a mini box of raisins (oh, if only I knew how many more I’d consume that night…).

I was fine, right through the cocktail hour and the start of dinner. But that’s where the troubles began. You see, there weren’t many passed hors d’oeuvres during the cocktail hour, and I could’ve really used some because I hadn’t eaten anything besides the sandwich and the raisins all day long. By the time dinner started, I was ravenous and basically shoved anything within arm’s reach into my mouth. This included a lot of cheese, meats, and pieces of flatbread.

If I’d actually been thinking about how my blood sugars usually respond to slow-acting carbs in things like flatbread, I might’ve actually wound up okay. But over the course of the next several hours, as wedding guests were whooping it up on the dance floor, my blood sugar was making a slow and steady climb up into the 300s! When I finally realized this, I started taking correction boluses that, apparently, were far too aggressive…because when I finally ended the night in my hotel room around 1:30 A.M., I was in the 70s. And dropping.

My lowest blood sugar was 43 that night. I ate multiple packs of raisins, 5 or 6 glucose tablets, a FiberOne bar, and half a pack of peanut butter crackers. All between the hours of 1:30 and 4 in the morning. It was exhausting. I was tearful and sweating so badly at one point that it looked like I had just come out of the shower. I even wound up sending my sleepy boyfriend down to the lobby at one point to buy me an orange juice, because I was running out of low blood sugar remedies. I drank half of it and was relieved to see my CGM showing, at long last, a diagonal up arrow. I couldn’t believe that I’d just spent the last few hours hovering below my “low” threshold on my CGM, but I didn’t waste any more time thinking about it – I was extraordinarily tired and happy to finally go to sleep.

But now that I’ve had time to think about it, I’ve realized that I need a new strategy for myself and my diabetes when it comes to weddings. I’m going to be my cousin’s maid of honor next month, for goodness’ sake, so I want to do everything I can to ensure “decent” (i.e, blood sugars under 200 but over 80) for the special day.

A key to success, I think, will be regularly scheduled meals and making sure that I avoid an empty stomach at all costs.