This blog post is a response to a prompt provided by my friends at the College Diabetes Network, who are celebrating College Diabetes Week from November 12-16. Even though I’m no longer in college, I like to participate in CDW activities as much as possible to show my support for the CDN! 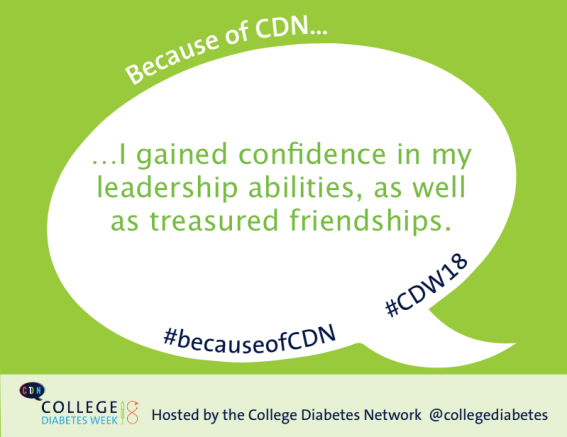 In my last Memory Monday, I touched on how CDN changed my life. But I didn’t go into great detail on how, exactly.

CDN was my first leadership opportunity as a young adult. In college, I became President of the UMass Amherst chapter of the CDN. That role came with tons of responsibilities: organizing meetings, recruiting new members, creating a constitution, getting approval from the student government, keeping track of chapter finances, electing an executive board…it was exhausting! But I was passionate about it and wanted to see it succeed, so I threw myself into the work of running a chapter. I took my role as a leader seriously, but also wanted to make sure that the group benefited everyone who decided to join it. I did my best to listen to member feedback and apply it accordingly to group meetings and activities, which I think shows that I’m a receptive leader.

And my involvement as a chapter leader is what brought me so many friendships. That’s because I was able to attend the inaugural CDN student retreat during my final year of college. That’s where I met student leaders just like me from colleges across the country. We commiserated on the hardships of running chapters as well as the challenges of having diabetes in college, and straight-up bonded for the few days we spent together. I felt that the retreat helped me come out of my shell a bit, and only molded me into a more confident leader with more resources than before that could help me run my chapter most effectively.

I’ve said it before, and I’ll say it again: I’m eternally grateful for all the wonderful people and opportunities that CDN has brought into my life.