Sun’s out, pumps out, amirite guys?

The summertime season is in full swing, and now that it’s here I’m thinking of the various ways my diabetes is more pronounced in the warmer weather. It’s much more visible, leading to many more questions, but what are the cues that give it away to others? I thought of four…

Visible sites. Shorts-and-t-shirts weather makes it much harder to place pods or CGM sensors in discrete locations. And if I’m going to the beach? There’s no way that I can even attempt to hide my devices. That’s probably why I make them even more obvious with…

…Pump and sensor art. I’ve written about Pump Peelz and GrifGrips in the past – they make adhesives and skins that are specially designed to fit pods, PDMs, pumps, meters, and more. The products they make are truly little works of art for diabetes devices, and I like to make sure all of mine are decked out in the summer months so I can show off tech that’s not only functional, but also stylish.

Gadget tan lines. Or if you’re like me, it’s more like sunburn lines. That’s because each summer, without fail, I somehow manage to neglect the space around my pod or my sensor, so when it’s time to remove it, there’s a huge red circle around the perimeter of where the device was situated. Maybe this year I’ll actually learn my lesson and take the time to apply sunscreen properly so I can avoid the very not-cute sunburn circles.

Travel coolers. This is probably the least obvious sign of diabetes in the summertime, but to those in the know, coolers meant to protect insulin are pretty recognizable compared to regular coolers. Whether it’s a Frio cooling pouch or another brand of insulin cooler, people with diabetes tend to carry these throughout the summer months in order to prevent insulin from spoiling due to heat exposure.

“Yo, I don’t mean to be rude, but what’s that thing on your arm? Looks pretty cool.”

I turned around to face the stranger who was looking at me and asking me this question. It was well after midnight and we were on the rooftop of a fairly crowded bar. It was a balmy, summery night and I was enjoying the atmosphere with my boyfriend and my best friend. I’d had a few drinks over the course of the night, but judging by the state of everyone else on the rooftop, I was probably more sober than most of them.

I could’ve answered his question in a scolding manner; it wasn’t a “thing”, it was a device that keeps me alive.

I could’ve totally dismissed him and told him to mind his own beeswax, because really, it is sort of rude to point out something on another person’s body.

I could’ve lied and told him it was something that it’s not to get him to stop bothering me.

I could’ve launched into an educational breakdown of what an insulin pump is and why my OmniPod looks the way it does.

I could’ve done any number of things, but instead I decided to say, “Oh, this is my insulin pump. I’ve got it decorated right now with a picture of a lighthouse because I like adding some style to it.” I smiled at him as a way of reassuring him that I really didn’t care that he was asking me, because I didn’t.

My straightforward answer seemed to please this random man. He told me again that he thought it was cool, and then we chatted a bit about where the lighthouse is and discovered we both have a connection to Massachusetts. Within a few brief moments, the conversation was over as we went our separate ways.

It was a perfectly harmless interaction that could’ve went a number of different ways, but to me, it’s all about context. This guy was just asking out of curiosity, and I truly don’t think he was trying to be rude about it. So I answered his question succinctly but good-naturedly, because I felt that was the only way to go about it in this busy party environment. Plus, let’s be real here…had I delved into a discussion about diabetes and devices, this drunk man probably wouldn’t have digested a single detail of my description. (Ahh, I love alliteration.) And another important point? He was damn right, my pump did look cool because of the lighthouse sticker!

But man, how much simpler it’d’ve been if I’d just been wearing my “THIS IS MY INSULIN PUMP” sticker on my pod that night.

Holiday shopping can be hard. Especially if you’ve got a long list of people to shop for, and you’d like to give them thoughtful, practical gifts.

While I don’t have tips and tricks on how to pick out the perfect present for everyone on your list, I do have some ideas as to what you can get that special T1D in your life. The following six items can make fun stocking stuffers or gifts that your beloved T1D is sure to appreciate. 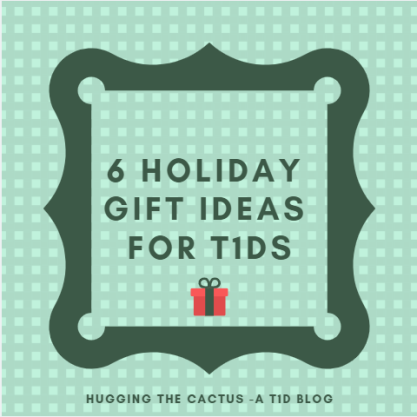 Of course, these are all just some suggestions. If you’re still stumped, I often stumble across amazing products just for T1Ds on Instagram. Who would’ve known that there’s virtually an endless array of goodies for T1Ds out there? With a little research and thoughtfulness, the T1D in your life is bound to be grateful for not just your gift to them, but also for your support in the fight against diabetes.

Disclosure: I am not paid to promote any of these products. The intent of sharing these items is to provide useful information to readers of my blog. Please visit the links I’ve shared to learn more about the products featured in this post.

There’s nothing worse than medical adhesive that just won’t stick.

If an infusion site or CGM sensor fails to stick to the body, that almost always means that there’s no choice but to dispose of it prematurely. And that is the definition of a total waste, which is a horrible feeling when it comes to exorbitantly expensive diabetes supplies.

So you can probably imagine my vague sense of panic when less than 12 hours after inserting a recent CGM sensor, it started to peel around the edges. Actually, that’s phrasing it a bit lightly – one half of it was practically flopping off my arm. No matter how much I pressed it back against my skin, it wouldn’t stick. I knew that I needed to save it somehow, and fast.

My first resort was a Patch Peel – it’s cut to accommodate the CGM transmitter; as such, it was the most secure option I had available to me. But seconds after applying the patch, it started peeling all around the edges. WTF?! It was definitely the same strong adhesive that Pump Peelz uses on all of their products, so I didn’t understand why it wasn’t sticking. I cursed under my breath as I racked my brain, thinking of anything else I could use to salvage the sensor. I couldn’t bear the thought of throwing it away after less than a full day’s worth of use.

Then I remembered I had SkinTac, which is so strong and glue-like that I normally avoid using it. But desperate times call for desperate measures, right? I lifted up the edges of my patch and wiped the SkinTac all around my skin, patting the patch gingerly back into place as the SkinTac dried. And…it worked! My patch got wrinkly as hell as the adhesives bound together, but I didn’t care because I’d managed to save the sensor. Will it hurt in a few days when I peel off all those layers of adhesive? Oh yes. But I won’t mind at all because I didn’t have to waste a sensor with a retail value of about (cue the gasps) $165.

Diabetes can be an ugly disease.

It’s defined by finger pricks, drops of blood, infusion site bruises. Diabetes rarely leaves beautiful markings behind on the body; rather, it can make me feel unsightly.

Needless to say, diabetes occasionally makes me feel worse about my body. I try to project body confidence when around others, but on the inside, I’m terribly self-conscious about the way I look.

So that’s why it was wonderful to feel pretty with diabetes this past weekend.

I got all dressed up to go to a “punk prom” that my friend helped organize. The night was all about singing along to the angst-filled tunes of our youth, listening to local bands jam out onstage, and getting glamorous so we could pose for an endless number of photos with fellow attendees.

In the hours leading up to the event, I was a bit anxious about wearing my insulin pump and CGM in visible spots. They didn’t exactly match the dress I’d dug out from the bowels of my closet (and that I’d last worn in the 9th grade). But as I applied hairspray to my carefully coiffed curls, it hit me that I should just own the look. Sure, nothing about boring medical adhesive or the words “Dexcom G6” screams formal wear, but I had a couple tricks up my sleeve that could doll up my gear nicely.

Namely, I had Patch Peelz. Created by the folks over at Pump Peelz, this patterned tape could make my CGM look fancy. Between the unicorn print and the dark purple and blue color scheme, the patch would look like it was styled to match my dress. I couldn’t help but beam once I was 100% ready for the evening. Coordinated aesthetics aside, I felt like one of the unicorns on my patch: magical, vivacious, and yes, pretty.