It’s November 25th which means it’s day 25 of the Happy Diabetic Challenge! Today’s prompt is about the cost of diabetes. Naturally, I started thinking about just how much diabetes costs me, not just in terms of money but also emotionally and physically…

We all know that diabetes is an expensive chronic illness.

Diabetes is associated with doctors appointments, pricey medical equipment, and maybe even the occasional trip to the hospital…all of those things aren’t cheap. My insulin alone would cost me $4,962.32 per year if I was uninsured (and if I do the math, this means that I would’ve spent over $100,000 in the past 22 years on JUST INSULIN). Those are not small sums of cash!

Diabetes hits those of us who are affected by it hard financially, but there are also significant emotional and physical costs associated with it.

Emotional – Diabetes takes a toll on my mindset (un)fairly often…and it can happen so rapidly that I barely have time to process the emotions. For example, I can go from being happy-go-lucky to angry because my Dexcom alarm went off and it’s telling me that my blood sugar is high. The anger will hit me hard and I’ll spend too much time stewing over my blood sugar and the best way to correct it.

Plus, I’d be remiss not to mention diabetes burnout. It’s the feeling of total defeat, of no longer having the desire to take proper care of diabetes. It happens to the best of us, and it’s not fun to experience. But it makes sense to feel this way from time to time, because diabetes is so demanding and relentless. People with diabetes never get a break from it, so it’s no wonder that it takes a toll on emotional well-being.

Physical – Diabetes is a physically present in many ways on my body. The OmniPod insulin pump that I wear, as well as my Dexcom CGM sensor, leave the most obvious lumps and bumps underneath my clothing that often prompt unwelcome stares from strangers. And although these devices have improved my quality of life with diabetes, they’ve also undeniably altered my body image. I never had much self-confidence when it comes to that, anyways, and my devices certainly don’t improve how I feel about my own body. I know plenty of people with diabetes who can relate to that sentiment.

There are also the scars that diabetes leaves behind. My fingers are dotted by dozens of permanent black scars left from lancets pricking them multiple times per day for the last 21+ years. I sport purple circles under my eyes pretty frequently from a lack of sleep that is, more often than not, my diabetes’ fault. And sometimes, I have unsightly red marks when I remove old pods that practically look like zits and can take days to go away because the pods’ cannulas pierced sensitive spots. These are all unattractive, physical reminders of diabetes that I can’t do a damn thing about, and it’s frustrating to have even less control over how my body appears because of this stupid chronic illness.

Diabetes is a friggen’ greedy disease.

It depletes my wallet and emotional state, and it manifests itself on my body in ugly, visible markings.

It tries so hard to rob me of everything I’ve got.

But luckily, my determination to fight back harder against it is stronger than my diabetes will ever be.

Previously, I’ve written about what it feels like to have low blood sugar. While many people with T1D feel the same symptoms as me when they experience a low, there are even more who experience a wider variety of emotions and sensations.

Renza, a T1D Twitter friend of mine, did a little investigating into how others would describe what it’s like to have a low blood sugar. She sent a tweet that read:

#Diabetes friends. I’m crowdsourcing (again). If you had to use ONE WORD to describe how hypos/lows feel to you, what would it be. Go!! #Hypoglycaemia

She received nearly 100 responses, which I’ve compiled into the below graphic. 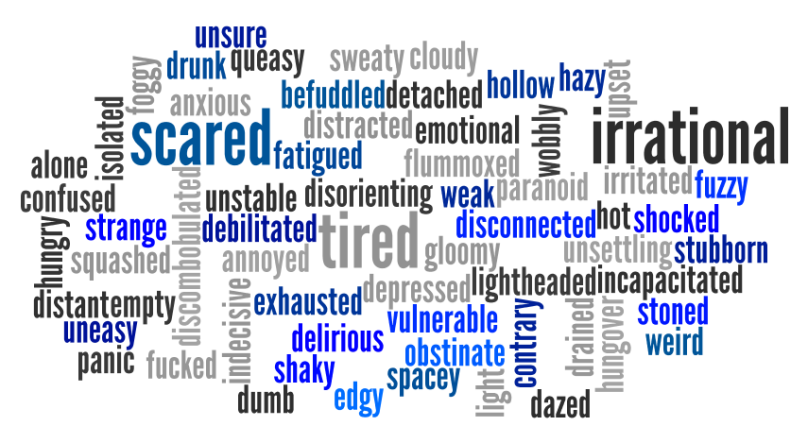 Looking at this word collage is a bit startling because it represents the vast array of feelings associated with low blood sugar. Most of them are negative. A handful of them start with the prefix “dis”, which describes something with an opposing force. A couple of them relate to feelings associated with eating. And just about all of them can be summed up as sensations that I wouldn’t wish on anyone.

To me, this graphic serves as a stark reminder that diabetes is more than just a chronic illness that affects the body: It affects the mind, too.